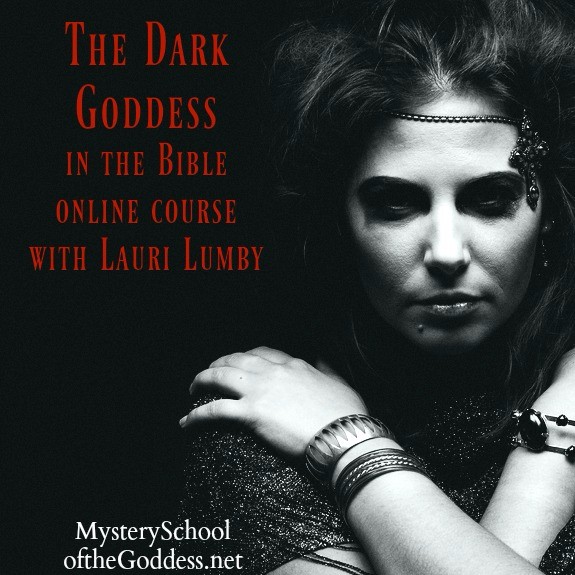 The Dark Goddess in the Judeo-Christian Tradition

Every culture and religious/spiritual tradition has its dark goddess. There is Kali in the Hindu religion, Pele in the Hawaiian culture, the Celts have the Morrigan, the Sumerian’s had their goddess Erishkegal who ruled over the Underworld. Each of these dark goddesses had their own unique gifts and purposes within the mythologies of these ancient cultures. Some were creators, others destroyers, some held sway over dark magic and others presided over the transformational journey - both in life and in the time between. Whatever her gifts and her purpose, the dark goddesses’ presence was integral to the health and wellbeing of the culture.

The Goddess, whether of darkness or light, however, cannot remain in the shadows and will find her way out, making herself known in whatever way she wishes. As the Goddess in her light form has found her way out in the Christian Mother Mary, so too has the dark goddess made herself known in the pseudo-historical/mythological women who have played pivotal roles in Judeo-Christian his/herstory. These are the women who suffered condemnation under patriarchal rule and who were made scapegoat for the sins of the men who ruled. These were the women who were leaders in their own right, but were later condemned as witches, harlots or whores. These were the women who played the role of transformer, but were later judged as evil. These were the Goddesses who ruled as equal beside their masculine counterpart but who were later set aside in favor of a god who is only man.

Lilith - Adam’s “first wife,” made of the same substance as Adam.

Eve – The Mother of the Living

The Witch of Endor – Counsel to the King

Salome – Making the Way for Christ

The Whore of Babylon – Catalyst for Change

In this online course, you will have an opportunity to meet each of these Dark Goddesses of the Judeo-Christian tradition and through learning, meditation, creativity exercises and ritual, become attuned to their presence. With the support of the Dark Goddess, you will find the courage to move through the trials of life and be empowered, like her, to be a vehicle for transformative change.

A note from Lauri on the Dark Goddess:

In the past several years, I have become more and more aware of my call to be a "shadow worker" (read my blog about shadow workers HERE). Having been raised Catholic and receiving the majority of my ministerial and counseling training through the Catholic Church, "shadow worker" was a phrase foreign to me, and admittedly brought up images of demons, the devil, and other evil things lurking in the shadows. What I have come to understand that shadow work is the Goddesses work, specifically, that of the Goddess in her "Dark" forms.

To me, the Dark Goddess is that which supports us in being present with that which others might avoid - fear, depression, melancholy, loneliness, evil, violence, disease and death. The Dark Goddess supports us in being present in and through these areas of "darkness" in our lives and this work is no less holy than holding someone in the light...in fact, it might be more holy. As I have reflected on this very real "shadow" experience in my life, I have come to understand that the Dark Goddess is not absent from the Catholic/Christian tradition in which I was raised, but is in fact, quite present. She is present for those who have eyes to see and ears to hear her voice which whispers to us through the words of the patriarchal agenda and the men who wrote the scriptural text. The Dark Goddess is where she should be found - hiding in plain sight....when we have the courage to look.

Scripture Disclaimer:  You will notice that scripture plays a predominant role in my writing and in most of my local and online courses.  Please note that my approach to scripture is unlike any you have likely experienced before!  I do not approach scripture from a dogmatic or doctrinal perspective.  Neither do I use it as a way to instill fear or manipulate specific actions or behaviors.  Instead, I approach scripture as the ancients did – as a collection of stories which have the opportunity to reflect back to us aspects of ourselves.  In this way, scripture becomes a vehicle through which our highest self can speak to us – providing guidance, support, inspiration, nourishment and even healing.  When we pierce through the veil of other people’s interpretations and allow the Divine to speak to us personally and directly through these ancient texts, we discover the transformational power of The Word as it was originally intended – as a tool to guide and sustain us on the path of love.

Lauri Ann Lumby, OM, MATS is an author, teacher, priestess, healer and prophet. She is the author of the highly-anticipated, Song of the Beloved – the Gospel According to Mary Magdalene and Authentic Freedom, both of which reveal the hidden teachings of Jesus as revealed through his most devoted student, co-equal minister and beloved partner, Mary Magdalene. For over twenty years, Lauri has researched, studied and put into practice these hidden teachings of the Judeo-Christian tradition and discovered within them rich and effective tools for facilitating self-awareness and self-actualization. These teachings and practices prove that beyond the doctrine resides the truth that unites all people – the truth of Oneness in Love. As a priestess of the Magdalene/Christ, Lauri shares these teachings through her on-line and local courses, one-on-one mentoring, writing and publishing.

Lauri is the owner of Authentic Freedom Academy and founder of the Order of the Magdalene. She lives in Oshkosh, WI. You can learn more about Lauri, her writings, programs and services at www.lauriannlumby.com.